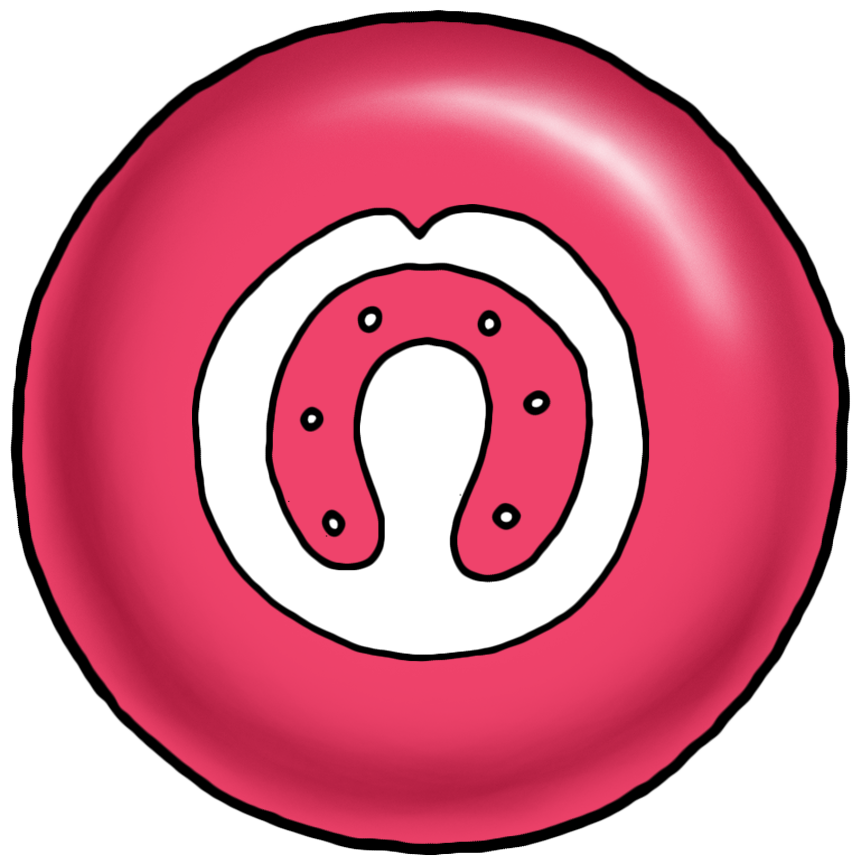 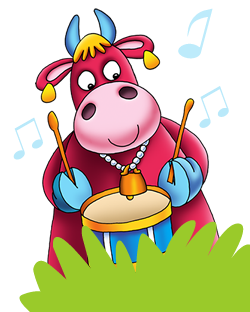 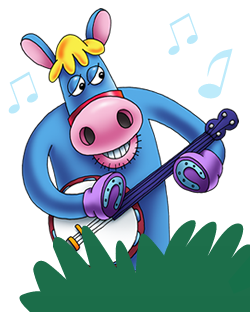 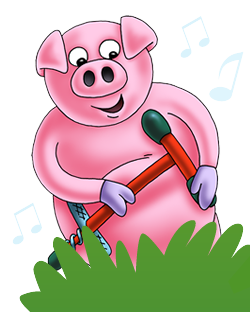 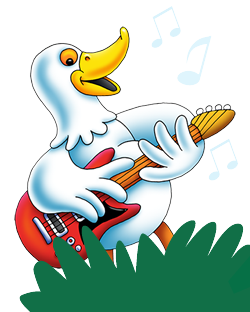 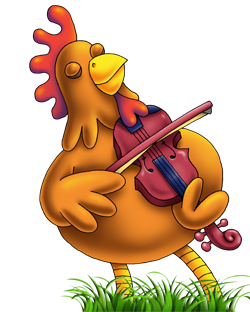 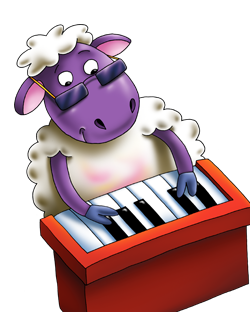 She plays the drums! Have you ever seen such a thing?

Maggie is the only one of the moo croo who was born at Chestnut Farm. She first discovered she had a great sense of rhythm after a mishap in the yard. She got her front hooves stuck in a couple of cartons, one of which was full of nails. For the rest of the day she walked around the farm with a bop, tish, bop, tish, bop, tish. Although she is glad she found her talent, she did learn that it's always best to clean up after yourself and put things away in a safe place.

Maggie is best friends with Ollie Oink and one Christmas, Ollie gave her the beautiful bell you can see in the pictures. The following year he bought them a large blanket to share, just to help keep each udder warm.

Although she mainly plays her drum, she occasionally hits her bell when she gets really excited.

Drummers all around the world are now using cowbells and it's all thanks to you know who! Her favourite song is 'Milkshake'. She says it's because she loves to have a dance and jiggle just before milking time.

He plays on his pogo stick!

Ollie grew up on the farm next door to Chestnut Farm and would often sit at the fence, peering through, wishing he could join in with the moosic makers. Someone once said to him that he would only be able to join the band when "pigs could fly".

This got Ollie thinking and one Tuesday afternoon he raided his me-bank, bought himself a pogo stick and after a few attempts made it over the fence. He didn't really know how to play an instrument but boy could he sing and dance well!

The rest of the croo invited Ollie to live on the farm and he was very happy to be somewhere so clean and tidy as his last place was a real pig sty.

Ollie does most of the singing and his favourite songs are 'Let's eat fruit' and 'Bake a cake'. He says he likes the tunes, but we think it might be because they're about his favourite foods. He's not so keen on 'Ten fat sausages'.

He plays the banjo!

Henry first came to Chestnut Farm to replace Bob, whose job it was to pull the ploughs. (Bob don't work on Maggie's farm no more).

One evening while he was having a clear out in his stable he found Bob's old banjo. Within a few weeks Henry had learnt many chords and even started to sing along. When Henry is not twanging his banjo he can often be found reading books, or playing board games with the rest of the croo.

Henry is best friends with Doris Duck. Doris had been minding her own business (not to be confused with babysitting her own droppings) in a neighbouring pond when she heard a familiar 'quackety quack quack' coming from the farm. Expecting to find another duck to make friends with she flip-flapped her way across the yard following the quacks. Instead of finding another duck however, Doris turned the corner and found Henry practising on his banjo.

Henry's favourite songs are 'The silly song' because he loves singing like the queen, and 'Feelings' because in the last verse he gets to use his long face.

She plays the bass guitar!

You know how Doris came to be at Chestnut Farm, but how she started to play the bass is another story. Like all the best bass players Doris started out as a guitarist, but the rest of Chestnut Croo really needed someone to play the bass. One Christmas, Maggie, Ollie and Henry all chipped in and bought Doris a beautiful red bass. Doris quickly fell in love with her new bass and found it much easier to play than the guitar because of her large feathers.

Doris has many hobbies, but she is happiest when she is doing sports. She loves playing football and her favourite footballer is English footballer, Chris Waddle. She used to love playing dodgeball, but had to give up because she would just turn her head when someone shouted 'duck!'

The only sport she doesn’t like is the egg and spoon race for obvious reasons.

She plays the fiddle!

Holly grew up next door to Chestnut Farm with Ollie Oink. Being a bit of an ‘80s chick she spent a lot of her early days lying around in her shell suit, but as she grew older she really enjoyed playing games and going for long walks with Ollie.

When Ollie left for Chestnut Farm Holly started to feel a bit cooped up on her own so she hatched a plan to go and join the croo. Early one morning she scuttled off to the market where she found a lovely second hand fiddle. She practised and practised, day and night until she was confident enough to fly over the fence and play some songs to the others.


They all loved Holly’s playing and invited her to join them immediately. As she is good friends with Ollie, her favourite song is ‘Rhyming Animal Friends'. She also loves ‘Wake up, Good morning' because she always wakes up very early and it helps to get her moving and ready for the day ahead.

He plays the piano!

Barry has always lived at Chestnut Farm but until recently he's spent most of his time out in the fields. Being the oldest, best behaved sheep it was always his job to count the others in and out of the fold each day.

He enjoyed it very much but kept falling asleep on the job. Like Ollie, Barry used to enjoy listening to the rest of the croo singing their songs and playing their instruments and he decided he wanted to join them. Noticing they didn't have a piano in their band, Barry bought one and taught himself how to play it. The rest of the croo were so impressed with Barry's playing that they asked him to join in and even bought him a pair of cool rock star shades!

Barry often enjoys watching football with Doris and of course his favourite player is English player, Alan Shearer. He says his favourite song is 'Find the rainbow' because he gets to play the piano really fast! He also loves ‘spring has sprung' because it reminds him of his birthday. 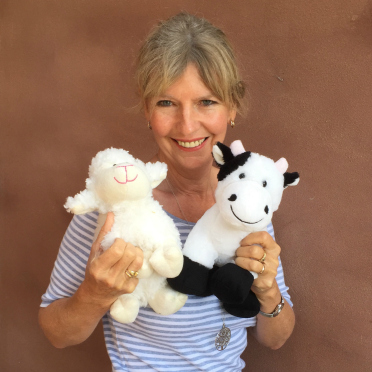 Australian Head Farmer. With 25 years experience in franchising and mum to 2 grown up kids, Carolyn is all set to grow Maggie Moo Music Australia. 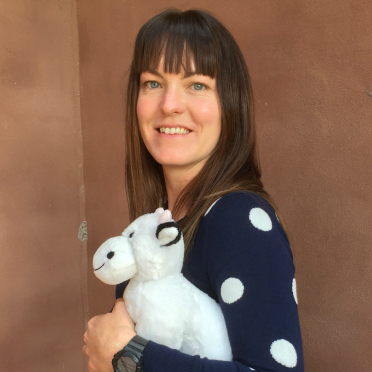 The indispensable Jess is involved in all aspects of running Moo HQ. Her Diploma in Early childhood education is a great asset to Moo HQ. 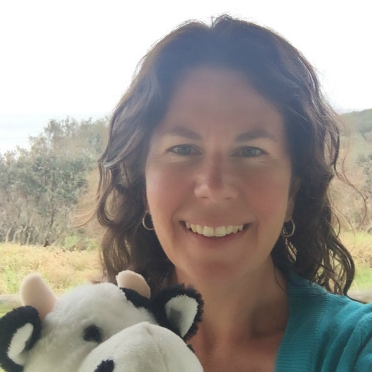 State Farmer (NSW & ACT), passion for marketing and business, and mum to 3.. Belinda is excited to be on the team to grow Moo in Australia. 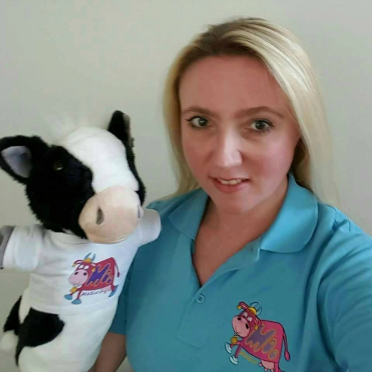 The first Maggie Moo Music farmer in Australia. After experiencing the magic of Moo in her Scottish homeland, she was excited to bring Moo to Australia when she moved here in 2015. 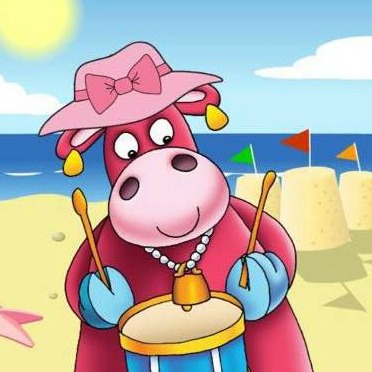 We have a few state farming positions available. If you think you have what it takes to be on the team and help us grow Moo in Australia, then contact us today!

Meet some of the UK originators, creators, consultants and advisory team for Moo Music. 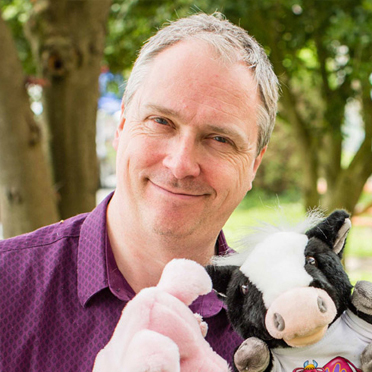 The multi-talented musician, singer and songwriter (who wrote all of the Moo Music songs) and father of 3. 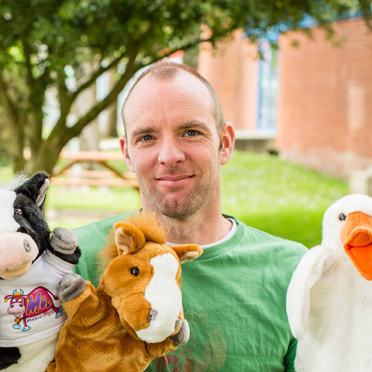 The ideas man, facilitator, musician, marketer and father of 2. 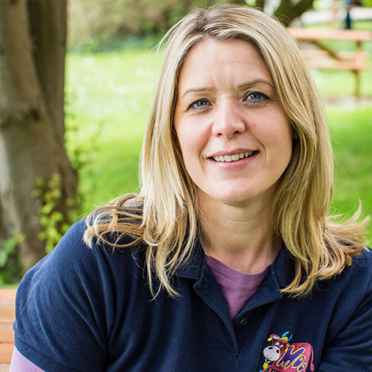 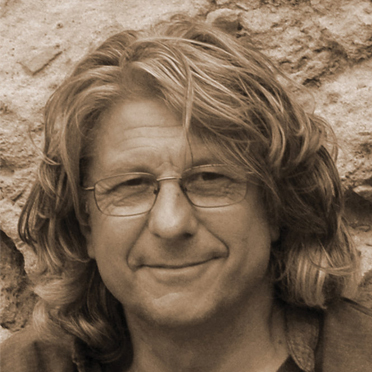